It has been reported that Athletic Bilbao’s young goalkeeper Kepa Arrizabalaga is on Arsenal’s radar. 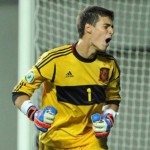 Don Balon revealed that Arsenal are tracking the progress of Arrizabalaga.

The 21-year-old has been touted as possible long-term replacement for Petr Cech.

Arrizabalaga is currently on loan at second tier side Real Valladolid, which is reportedly where he caught the eye of Arsene Wenger and his scouts.

A move for a goalkeeper could spell the end of David Ospina’s Arsenal woes.