It has been reported that Atletico Madrid directors are calm over the growing interest in midfielder Koke. 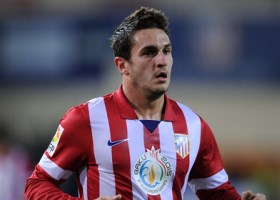 According to reports from AS, Manchester United, Bayern Munich and Barcelona are all chasing the young Spanish midfielder.

However it is said that Atletico are under no pressure to sell and confident Koke won’t kick up a fuss during the January transfer window.

The youngster penned new terms earlier this year through to 2018, which includes a buyout clause of €60 million.