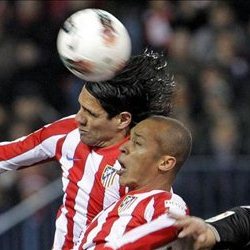 Valencia missed the chance to tighten their grip on third place in La Liga as they were held to a goalless draw by Atletico Madrid at the Estadio Vicente Calderon.

After a cagey first-half, Radamel Falcao came closest to breaking the deadlock for Atletico – but his shot was cleared off the line by Adil Rami.

It was a scrappy affair for long periods, but Valencia could have sneaked a winning goal late on had Jordi Alba not dragged his shot just wide of the post.

But these were rare flashpoints in a game that, having been billed as a showdown between each side’s star striker – Falcao and Roberto Soldado – was disappointingly low on goalmouth action.

But that will only be a minor concern to new Atletico coach Diego Simeone, who has now overseen five consecutive clean sheets since taking over from Gregorio Manzano in December.