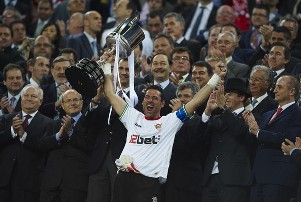 Goals from wingers Diego Capel and Jesus Navas earned Sevilla a Copa del Rey final victory over Atletico Madrid and their first trophy since 2007 at the Nou Camp on Wednesday.

The goals came early and late in the game, with Capel’s strike giving Antonio Alvarez’s side a dream start after five minutes and Navas’ effort clinching the game in stoppage time.

Between the two goals, they were the better side, but were unable to break down a Sevilla side which claimed their fifth Copa del Rey success.