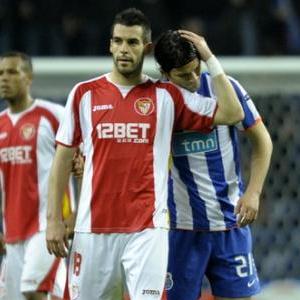 Jose Antonio Reyes netted a late equaliser against former club Sevilla to earn Atletico Madrid a share of the spoils from a 2-2 draw in a hugely entertaining clash between two of La Liga’s struggling big guns at the Vicente Calderon.

Sevilla, who this week were knocked out of the Europa League, twice took the lead through goals from Alvaro Negredo and Ivan Rakitic but Atletico hit back both times to deservedly claim a point.

Teenager Jorge Koke cancelled out Negredo’s strike with his first league goal for the club, while Reyes, who came up through the youth ranks at Sevilla, netted Atletico’s second equaliser with 14 minutes to go.

Both clubs will be pleased to have avoided defeat against one of their main rivals for a Europa League place, but they could find themselves even further adrift of the top six if Athletic Bilbao beat Valencia on Sunday.