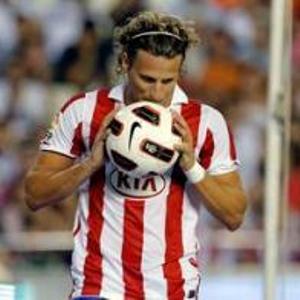 Diego Forlan was on target as Atletico Madrid moved up to sixth in La Liga with a 3-0 win over Real Mallorca that saw both teams finish with ten men.

Valera headed home the opener with his first goal in over two years on 13 minutes before Uruguay striker Forlan sprung the offside trap to slip home the second 11 minutes before the break.

Former Arsenal midfielder Jose Antonio Reyes slid the ball through the legs of visiting keeper Dudu Aouate for the third of the night in the final action of the match deep into time added on.

The game was never a kicking match, yet the referee somehow contrived to send two players off in the second half.

Home keeper David De Gea dived to save Pierro Webo’s penalty after Antonio Lopez was sent packing for hauling down Emilio Nsue midway through the half.

Jonathan De Guzman joined him up the tunnel for a clumsy late tackle on home substitute Juanfran eight minutes from time.

Atletico were always in command in snaring their first win of the year against a Mallorca side who lacked the necessary incisiveness to cut through the home team despite their best intentions.