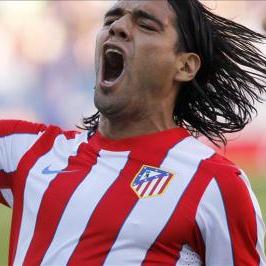 New signing Radamel Falcao lit up the Calderon with a splendid hat-trick to set Atletico Madrid on the way to a 4-0 win at home to Racing Santander in La Liga on Sunday.

The Colombian striker, top scorer in last season’s Europa League with 17 goals as he led Porto to the title, netted the opener in the 23rd minute at a sun-bathed stadium after good work by former Arsenal winger Jose Antonio Reyes.

His second came from the penalty spot in the 36th after Brazilian Diego, another close-season addition to Gregorio Manzano’s squad, had been felled in the box.

Atletico’s third high-profile new signing, Turkey midfielder Arda Turan, then played Falcao through to complete his treble with a deft chip over goalkeeper Tono 10 minutes after the break.

Brought in to help fill the gap left by the departures of Diego Forlan and Sergio Aguero, the Colombian was given a rousing ovation by the home fans when he was substituted midway through the second half.

Turan claimed his second assist with just over 10 minutes left when he crossed for substitute Adrian to glance a header past Tono for the home side’s fourth to round off their first win of the campaign. There Are Offers But I’m Focused On Atletico – Diego Costa