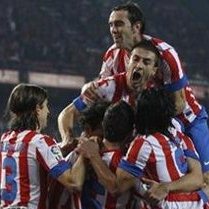 Atletico Madrid stretched their 100% record at the Vicente Calderon this season to 10 games with a comprehensive 4-0 victory over nine-man Sevilla.

The game was almost over as a contest after just 20 minutes when Koke was brought down by Federico Fazio inside the area and – after the Italian defender had seen a red card for a professional foul – Radamel Falcao hammered home his 14th goal of the season from the penalty spot.

Two goals in four minutes just before half-time sealed the points for Atleti as Emir Spahic turned Arda Turan’s cross into his own net before Koke capped a fine individual display with a stunning volleyed finish from Diego Costa’s lobbed pass.

And Sevilla’s miserable night was rounded off when Ivan Rakitic received a second yellow card for hacking down Tiago, leaving Miranda to tap home a fourth goal in stoppage time.