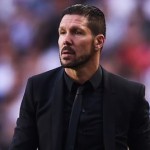 Atletico Madrid president Enrique Cerezo has declared that they are not shopping in the Premier League.

Cerezo told Radio Marca : “Many names have been mentioned, but none of those players, neither Cazorla, Callejon, Torres nor Chicharito (Hernandez) are on our agenda,”.

“If we sign another player, it won’t be any of them.”