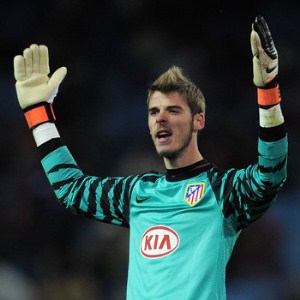 Atletico Madrid chief Miguel Angel Gil Marin has revealed that there is no deal with Manchester United over the sale of goalkeeper David De Gea.

Onda Cero reported agent Jorge Mendes had travelled to England and reached an agreement with the Premier League giants that will see the 20-year-old Spanish goalkeeper join the Red Devils for a fee of 25million euros (£22.5m).

However, speaking to Spanish newspaper AS, Atletico’s chief executive Angel Gil said: “Mendes is in England, but it is for nothing related to De Gea. He doesn’t have any power from Atletico to negotiate for the player.

“At the end of the season we will see if (De Gea) he goes or if he remains. If he wants to go, we will refer to his buy-out clause. As of today, Atletico count on him for next season.”