It has been reported that Atletico Madrid have eliminated Arsenal from the UEFA Youth League. 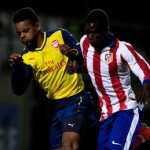 Atleti won 1-0 in the knockout tie to reach the quarterfinals.

Dan Crowley, Gedion Zelalem and Ainsley Maitland-Niles started for the Gunners in Spain, but they couldn’t break down the hosts despite Theo’s sending off late on.

Amath Diedhiou scored the only goal of the game after less than 60 seconds to see Atletico through to the quarter-finals.