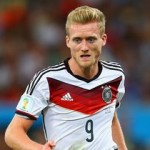 AS reported that the German international is highly admired by Atletico coach Diego Simeone, who is anxious about strengthening his attack for the new season.

The Spanish champions believes they can tempt the 23 year old to Madrid with the guarantee of regular first team football.

At Chelsea, Schurrle’s playing chances have been further reduced by the arrivals of Didier Drogba and former Atletico star Diego Costa.

Simeone likes the idea of Schurrle playing just behind new signing Mario Mandzukic in attack for the coming campaign.