Reports are out claiming that Atletico Madrid have joined the interest in Manchester United midfielder Juan Mata. 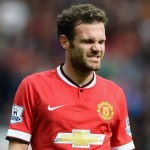 The Mail on Sunday reported that although Valencia have moved into pole position to lure Mata from Manchester United in the summer they will still face competition from Spanish rivals Atletico Madrid.

Italian clubs Juventus and Roma would still be interested in the Spain international who, while still being part of the action at Old Trafford, is a player that Louis van Gaal sees as disposable. Diego Simeone Warns Chelsea : The Tiger Will Be Ready!