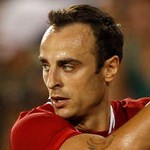 It has been revealed that Atletico Madrid are set to be offered Manchester United striker Dimitar Berbatov in January.

The Daily Star reported that the Bulgarian striker will seek a move away when the winter market opens if his first team situation doesn’t improve.

Among the clubs to be contacted by Berba’s camp will be Atletico.

The Bulgaria international could arrive as a replacement for former United striker Diego Forlan, who left for Inter Milan last month.