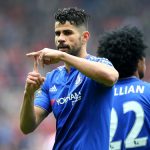 Reports are out claiming that Atletico Madrid refuse to drop their pursuit of Chelsea striker Diego Costa.

Atleti boss Diego Simeone wants a world-class striker to augment his attacking options and he is keen to see the return of Costa, who left the Spanish capital to join Chelsea two years ago.

Even though they have struggled in their attempts to prise the Spain international away from Stamford Bridge, Atleti have not given up hope of re-signing him, although they are aware they it will be a very difficult deal to pull off.