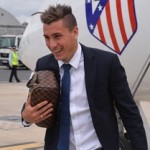 Reports are out claiming that Atletico Madrid have moved quickly to upgrade the contract of Manchester United target Jose Maria Gimenez.

The Mirror revealed that the 19 year old has caught the eye of Europe’s top clubs in Brazil after assured performances against England and Italy, and has a release clause of just £19.2million in his Atleti contract.

Gimenez has barely featured for the Spanish champions, making his international debut in the crunch World Cup qualifier with Colombia before he had even played a senior game for the Madrid side, but they have begun moves to prolong his stay in the Spanish capital.