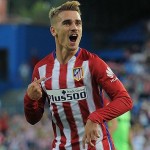 It has been reported that Atletico Madrid will consider selling Chelsea target Antoine Griezmann.

Don Balon says Atletico could be willing to part with Griezmann if they can get in a replacement.

Bayern Munich are also interested after revelations that Arjen Robben could soon be on his way.

Atletico are considering moves for Thiago Alcantara and Nicolas Gaitan if Griezmann does leave.

The Blues were in for France striker Griezmann in the summer but were unable to push through a deal.

Arsenal are also said to be monitoring the French international.

Fernando Torres : I Should Have Done Things Differently!