Reports are out claiming that Atletico Madrid have put the Premier League’s big spenders on notice over the availability of Joao Miranda. 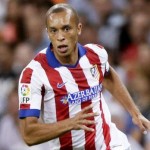 Marca reported that Atleti are reluctant to extend Miranda’s contract and are considering cashing in on the 30-year-old.

Miranda is now inside the final 18 months of his current deal and keen on one final payday.

Chelsea, Manchester City and Manchester United are set to battle it out for the Brazilian, who is rated in the £15 million class by Atleti. Rooney Contradicts Ferguson : I’ve Had No Ankle Problem All Season!