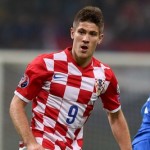 Reports are out claiming that HNK Rijeka striker Andrej Kramaric admits he favours a move to Spain.

The 23 year old Croatia international is expected to leave Rijeka in January and he has attracted a bid from Leicester City.

Atletico Madrid have also been linked with Kramaric and the striker said: “I would like to play in the Primera División as Spanish football is, for its style, the best for me.”

On his next move, Kramaric added in Sportske Novosti: “I expect a difficult decision. I have had several sleepless nights, but I still have to think about it.”