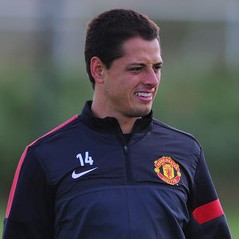 It has been revealed that Atletico Madrid see Manchester United striker Javier Hernandez as a readymade replacement for Radamel Falcao.

The Daily Mail reported that the Spanish club are hoping that United’s Hernandez can be the man to fill Falcao’s boots should the striker depart as expected in January.

Falcao, 26, has become the most sought-after striker in Europe and Chelsea, Paris Saint-Germain and Manchester City are queuing up to meet his £46m release clause in the next transfer window.