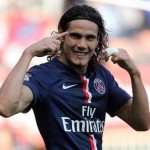 Reports are out claiming that PSG are ready to cash in on Edinson Cavani this summer.

The Uruguay international striker is being linked with Manchester United, Arsenal and Juventus.

TF1 says Atletico Madrid have made an offer for Cavani and negotiations are at an advanced stage.

PSG are keen to sell after receiving encouragement from Paul Pogba’s management about the prospect of him leaving Juventus this summer. The sale of Cavani would help offset any FFP doubts over a deal for Pogba.

With Atletico’s bid being made public, it’s expected to flush out rival suitors, including United and the Gunners.