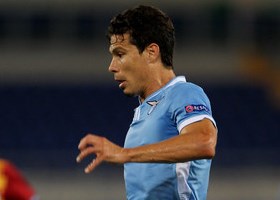 Reports are out claiming that Atletico Madrid are tracking Lazio midfielder Hernanes.

It is said that Atletico coach Diego Simeone is in the market for a new midfield playmaker and is a big admirer of the former Sao Paolo star.

The 28 year old Brazilian international has been linked with a move away from Lazio as the Rome club struggles for form this season.

Premier League club Arsenal has also been linked with a move for Hernanes. Tony Adams : Arsenal Will Not Challenge For Titles!