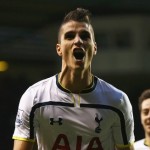 It has been reported that Atletico Madrid are weighing up a move for Tottenham midfielder Erik Lamela.

The La Liga club could be forced to enter the market for a new winger with Antoine Griezmann attracting interest from Chelsea and PSG.

The London Evening Standard says Lamela, who has struggled to settle during his first two seasons at Tottenham, is one of the players they are tracking.

Spurs are willing to sell this summer, with the former AS Roma ace also being linked with a return to Italy.

But at £30million, Lamela is Spurs’ record signing and chairman Daniel Levy would be reluctant to accept a substantial loss on his sale.