Arsenal hopes of signing Atletico Mineiro midfielder Bernard has been dealt with a huge blow with the Brazilian club saying that they are prepared to listen to offers of around £21.5million for the player.

The 20-year-old Brazilian international has been recently linked with with Premier League power-house Arsenal, was previously linked with Porto and Shakhtar Donetsk who have already made offers for his signature. 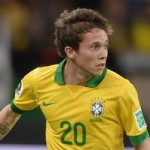 Atletico Mineiro’s director of football Eduardo Maluf claims that the offer they would require has yet to be received.

“The president has made it clear that if there is a 25m euros offer, he will sell Bernard and we will sign another player,” Maluf declared.

“Otherwise Bernard stays. He is young and can leave at the end of the year.

“Arsenal have denied the Bernard rumour. He is the great player of the moment.”

I Want to Coach a Premier League Team – Guardiola

Thomas Vermaelen : I Am Fed Up Playing At Left Back!