It has been reported that Atletico Madrid are referring all interested clubs to Joao Miranda’s buyout clause. 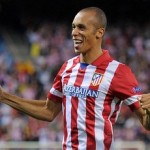 The Daily Mail reported that Atletico are refusing to negotiate over the transfer of centre-back Miranda insisting clubs meet his buy-out clause of £24.2million if they want to buy him.

Simeone wants to build on the success of last season but with his squad being dismantled to pay off debts he is concerned at what will be left.

Miranda turns 30 in September and has reached an impasse in talks over a new contract. Manchester City, Manchester United and Barcelona have all shown an interest although United insist they have not made any offer.