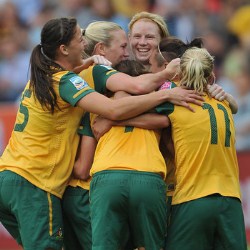 Australia downed Norway 2-1 in Leverkusen to qualify from Group D of the Women’s World Cup and eliminate their opponents.

Two goals from Kyah Simon gave the Matildas the three points after Elise Thorsnes had opened the scoring for Norway.

In the other Group D game Brazil saw off Equatorial Guinea 3-0 with goals from Erika and Cristiane (2) which means Norway finish third behind Australia in second while Brazil top the group with a 100 per cent record.