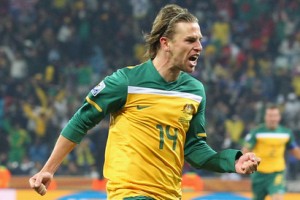 Australia beat Serbia 2-1 to seal both teams’ exit from the World Cup. The Socceroos looked like they might cause an upset after going ahead, but Serbia’s Marko Pantelic hit back to see them miss out by a single goal.

Ultimately Serbia paid for their earlier profligacy as second-half goals from Tim Cahill and Brett Holman sent them crashing out.

Australia’s effort dragged them off the bottom of the group but it was too little too late as Ghana edged them out of the second round on goal difference. It was a face-saving win for Australia that seemed barely likely in the first half as they struggled to cope with Serbia’s pace and technical excellence.