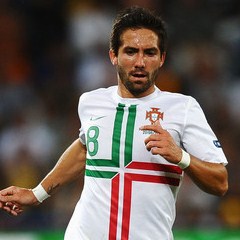 It has been revealed that Andre Villas-Boas is making Porto star Joao Moutinho his No1 target as new Tottenham manager.

The London Evening Standard says the 34-year-old has spoken with chairman Daniel Levy over his plans and ideas for the club as part of the interview process and knows that he will probably have to find a replacement for Luka Modric.

Villas-Boas is believed to already have a replacement in mind and wants to be reunited with Moutinho.

He wanted to buy the Portugal international after he took charge of Chelsea last summer, but Porto refused to sell.

It will still be difficult for Tottenham to prise Moutinho, who impressed for Portugal during their run to the semi-finals at Euro 2012, away as he has three years left on his contract.

Emmanuel Adebayor : I Would Love To Stay At Tottenham!