Reports are out claiming that Tenerife striker Ayoze Perez is set for a summer switch for Newcastle United. 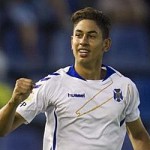 It is said that the 20-year old Spaniard is set for a medical with the Magpies before making a £1.8million shift to England’s north east.

Perez has been linked with the Toon for a little while now and it appears as though his deal will go through before the end of the week.

Perez, who has been with Tenerife since he was an 11-year old, scored 16 goals in 34 Spanish Segunda Division appearances last season.