Reports have emerged claiming that Bacary Sagna has confirmed that he will leave Arsenal this summer. 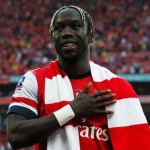 The French international right-back has been in talks with the Gunners regarding a new deal for months now but has finally revealed that he will officially leave the Emirates Stadium when his contract expires at the end of June.

“They tried to make an effort, but the discussions have not gone in the direction I wanted.”

He added: “To finish at Wembley with the (FA) Cup, it was something magical.

“It was an honour to evolve in that shirt, Even though we were criticised for quite some time due to the lack of trophies, I spent some magical moments there.