It has been reported that Bacary Sagna was disappointed to make a losing home debut for Manchester City. 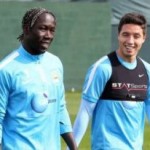 Sagna, who arrived on a free transfer from Arsenal, said: “It is very disappointing because we wanted to win, especially at home.

“We knew it was going to be a very hard game. We had to be patient and make no mistakes but on the counter-attack we got caught.

“We have to learn from this and look forward because this is only the beginning of the season and we have to keep working.

“I wish I had won my first game. I am very sad but tomorrow is another day.

“I am going to work hard to bring something different to the team, to bring this team up and be champions at the end of the season.”