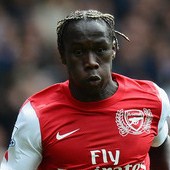 Arsenal fullback Bacary Sagna is out of the Euros after breaking his leg against Norwich City.

Gunners boss Arsene Wenger confirmed Sagna had suffered a broken leg during the first half, an injury which will sideline him for several months.

Wenger said: “It is broken fibula, the same leg (that he broke in October).

“He was kicked on it, it has not happened alone.

“When he was kicked, he has broken the leg. The guy closed him down and walked on him. I don’t know if it was deliberate or not.”