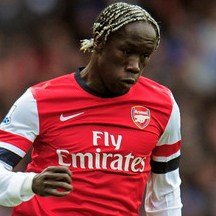 agna is out of contract in 2014 and, although Arsenal manager Arsène Wenger said that there had been positive progress during talks, no agreement has been reached.

It is understood that Sagna is unhappy at being offered only a one-year extension and there has been interest in him from both Inter Milan and Paris St-Germain.

“Before leaving, because I will leave here one day, I would like to win something with my club. I don’t want to answer yes or no now because in football you never know what will happen.”