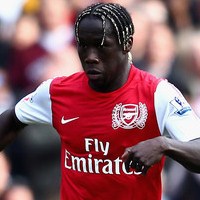 Bacary Sagna has slammed Arsene Wenger and Arsenal for failing to keep the club’s top players — hinting he could be next to jump ship.

The French full-back, 29, admits he was jealous of ex-Gunners team-mates and fellow countrymen Samir Nasri and Gael Clichy when they lifted the Prem trophy with Manchester City in May.

Sagna, still waiting to win his first silverware with manager Wenger after five years, insisted: “I am the last player from the 2007 starting XI remaining.

“In May, I watched Manchester City show off. I watched Samir and Gael lift the trophy.

“That gave me a desire for it. I want that. Were they right to leave? Yes.”

Sagna, battling back from a broken leg, questioned the Londoners’ transfer policy following another summer of high-profile departures.

Robin van Persie was sold to Manchester United for £22million, while midfield ace Alex Song went to Barcelona in a shock £15m switch.

Sagna, in an interview with French newspaper L’Equipe, added: “I expected the departure of Robin van Persie. We all expected it.

“But Alex was a surprise. He is 24 and had three years remaining on his contract.

“I still do not understand. It is a huge loss for the club. When you see the two best players of last season leave, you have a lot of questions.”

Sagna, whose current deal expires in 2014, admitted: “I just want to play again. Then we will see. Each person has his own destiny.”