It has been reported that Bacary Sagna insists he could still stay with Arsenal next season. 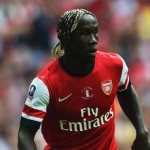 The French international has denied he’s agreed a Bosman move to Manchester City.

He said: “My situation will be sorted out before the World Cup, but I haven’t signed for anyone so far. I have agreed with no one.

“I don’t have any agreement with Manchester City or with anyone else. I have never set foot there. Several European and English clubs have contacted me.

“Certain talks have gone further than others, and Manchester City are among them. But today, I’m still an Arsenal player.

“Today, there’s a 90 percent chance I will leave and 10 percent that I will stay.

“I have been asking myself that question for a long time, and it’s the time for a new challenge.

“Arsenal is an extraordinary club that has given me the chance to grow, both in sporting and human terms. It’s a family club, I feel good here.

“I’ve had some very good years here. We all have our own destiny and I will try to find mine. Whatever happens, Arsenal will stay forever in my heart.”