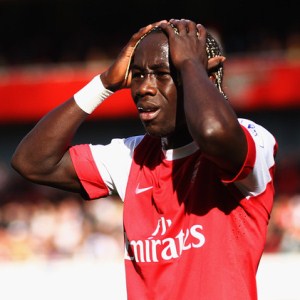 Arsenal fullback, Bacary Sagna wants the Gunner to use their latest Champions League lesson by Barcelona as inspiration to go on and defeat Manchester United as Arsene Wenger’s men chase a domestic double.

Arsenal were dumped out of Europe in the Nou Camp for the second successive season, where they lost 3-1, as a brace from tormentor-in-chief Lionel Messi helped the Spaniards overturn their first-leg deficit to record a deserved 4-3 aggregate win.

France defender Sagna said: “We can learn a lot from Barcelona – they kept playing as a team, kept passing the ball quite well. We have to think about the way they played and it must be an inspiration. We have to be strong because we want to be successful.”

Arsenal head to Premier League title rivals United, whom they trail by just three points and hold a game in hand, on Saturday looking to secure a return to Wembley with a place in the FA Cup semi-finals at stake.

Right-back Sagna insists having such an important fixture straight after such a disappointment can work in Arsenal’s favour.

He added: “We have to fight for the team, for the fans and everyone.

“We want to bring something back to the Emirates and so we have to think about the next game.

“Everyone is still confident we can win something.

“The good point is we don’t have time to think about what happened (against Barcelona). We just want to train as hard as we can and give the maximum.”