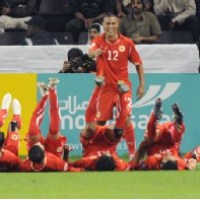 Abdulatif then opened his account after 19 minutes and grabbed another three minutes later before sealing his hat-trick 10 minutes before the break.

Sunil Chhetri pulled another goal back early in the second half and, although Bahrain had Aaish sent off just after the hour, they scored a fifth through Abdulatif.

A win for Bahrain in their final Group C game against Australia will send them through to the quarter-finals.