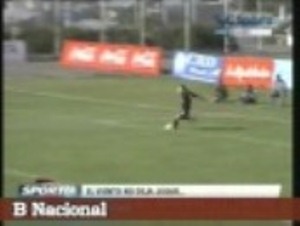 This incident happened during a game in the Argentine second division, commonly known as B Nacional.

The goalkeeper takes the goal kick but the ball which is flying through the air decides to make a U-TURN and flies behind the goal, obviously resulting in a corner kick.

It looked like the ball did not want to take part in the game anymore.

Of course, we all know that the strong wind has caused the ball to make the U-TURN but it is hilarious nonetheless.