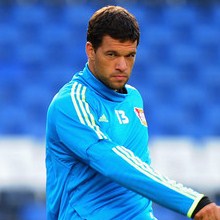 The former German international star spent four years with both clubs and was part of the Blues side beaten on penalties by Manchester United in their only previous final appearance in 2008.

“Of course Chelsea can upset the odds – they did it against Barcelona,” Ballack told Chelsea TV.

“Everything looks like Bayern are favourites, they are playing at home which is a big advantage in a final.

“They kicked out Real Madrid in the semis and, although they were two tight games, they deserved it.

“They have a good team and were in the final two years ago, when they lost against Inter Milan, so they’re very hungry.

The 36 year old also added ” “But Chelsea know their strengths and know their quality.

“They’ve had a difficult season but, in the last few weeks, have showed what they can do.

“They play exactly how they know they have to in order to win and they still have unbelievable quality.”