Mario Balotelli is confident the goals will flow for him. 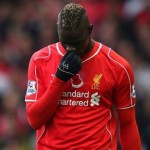 The Liverpool striker also says he’s working harder off the ball since joining the Reds.

“I don’t need people to believe in me so long as I believe in myself,” he told Fox Sports Australia.

“The important people for me are my family and my few close friends.”

Criticism of Balotelli has centred not only around his lack of goals but the apparent unwillingness to put in the effort on the pitch.

However, the striker insists he is working harder than ever before and rated his overall performance as 7/10 – a half-point increase on the assessment of himself two years ago.

“I run more than before,” he added.

“I’ve never run like this…so I give a half point more.

“Goals, they will come. It is something that’s just not coming at the moment.”