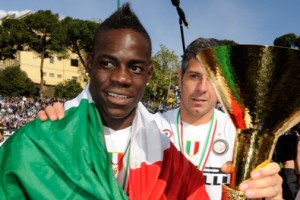 Sensational news are out and it has been reported that the agent of Inter Milan striker Mario Balotelli has arrived in Manchester to hold talks with both Manchester City and Manchester United.

The 19-year old Italian striker has been heavily linked with a move away from the San Siro this summer and agent Mino Raiola has confirmed that interest from both City and United is official although he was unsure if a deal would eventuate.

Raiola told calciomercato.it : “The interest of Manchester for Balotelli is concrete and both clubs have confirmed it,”.

“The player is clearly happy to be followed by (Sir Alex) Ferguson. But I cannot exclude that in the end the player will remain at Inter or play in a different club with respect to the English outfit.

“In any case we will take every step with calmness and evaluate each time the situation.”