Reports are out claiming that Barcelona president Josep Maria Bartomeu is coy over the future of Pedro. 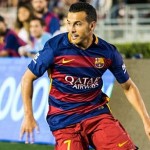 The Spanish international winger is a major target for Manchester United.

“Pedro has just renewed his contract.

“I’m reading that he doesn’t play much, but he forms part of the club’s history.

“He was part of the first treble-winning side and now the second,” said Bartomeu.

Pedro is also linked with Arsenal, Chelsea and Liverpool.