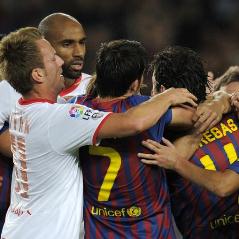 An incredible goalkeeping performance from Sevilla’s Javi Varas forced Barcelona to relinquish top spot in La Liga after a 0-0 draw at the Camp Nou.

Following Real Madrid’s 4-0 win at Malaga, Barca had to win to retain their lead atop the Primera Division but wonderful keeping by man-of-the-match Varas – who made a dozen top-class stops and saved a Lionel Messi penalty deep into injury time – saw the defending champions fail to win at home for the first time this season.

Varas’s once-in-a-lifetime shift between the sticks seemed to have been in vain when, three minutes into stoppage time, Federico Fazio caught Andres Iniesta in the box.

Frederic Kanoute was sent off for striking Cesc Fabregas in the melee but his antics seemed to help his team as Messi put a mediocre penalty to the right, which Varas duly tipped away.

Sevilla finished the game with nine men, Fernando Navarro sent off at the death for a rash tackle on Pedro, but Varas unsurprisingly saved Messi’s free-kick to earn his team a famous point. Sevilla To Sign Martin Caceres On A Permanent Basis