Barca’s 1-0 win moved them to within two victories of mathematically sealing the title, but without the injured Lionel Messi they struggled to break down a resolute Levante until Cesc Fabregas stroked home the winner eight minutes from time.

“It was important to win this game, despite some people wanting to make it look like the league doesn’t matter,” Fabregas told reporters.

“We know that we are working to win it and we know it is very hard work. We are going to continue fighting until the end to win it.”

Eric Abidal started for the hosts for the first time in 14 months following his liver transplant as Tito Vilanova rested a number of key players with Tuesday’s clash with Bayern Munich in mind. 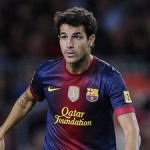 Arjen Robben : I Will Only Join Barcelona!