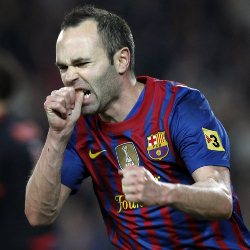 Barcelona produced an accomplished performance to defeat Athletic Bilbao 2-0 at Camp Nou and as a result remain six points behind leaders Real Madrid with eight matches remaining in La Liga.

In a match between two of world football’s most admired sides, both of whom rested key players in recognition of their European exploits this week, Barcelona took the lead with five minutes remaining of the first half through a thunderous finish from Andres Iniesta.

Pep Guardiola’s side have won all but one of their league games at Camp Nou this season and never looked unduly troubled against Marcelo Bielsa’s Basques, with Lionel Messi scoring his 56th goal of the season from the penalty spot in the second half.

However, their stylish victory was somewhat overshadowed by Real Madrid’s earlier 5-1 hammering of Osasuna, a result that keeps Barcelona firmly at bay, despite their best efforts to prevent their great rivals from claiming the Liga crown for the first time since 2008.