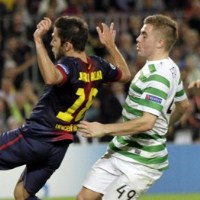 An injury-time goal from Jordi Alba stunned Celtic and gave Barcelona a dramatic victory in their pulsating Champions League Group G clash at the Camp Nou.

Celtic had led at the famous stadium when, in the 18th minute, Georgios Samaras’ header from a Charlie Mulgrew free-kick went in off the back of Barcelona’s makeshift centre-back Javier Mascherano.

And it looked for a while like the Greek striker, who had scored the winner against Spartak Moscow earlier in the month to clinch Celtic’ first away victory in the competition, might have just have played his part in an even more momentous goal.