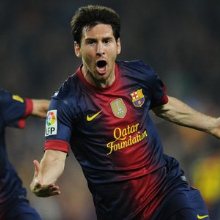 Lionel Messi and Cristiano Ronaldo matched each other blow for blow at the Nou Camp, bagging two goals apiece as Barcelona and Real Madrid battled out an entertaining draw in the first Clasico of the Primera Division season.

Tito Vilanova’s Barca headed into the game eight points clear of their arch rivals and boasting a 100 per cent record from their first six matches, but found themselves trailing midway through the first half when Ronaldo netted for the sixth straight Clasico.

But Messi equalised with a scrappy goal soon after and then put the hosts ahead with a stunning free-kick on the hour, only for Ronaldo to capitalise on sloppy defending midway through the second half to ensure honours ended even.