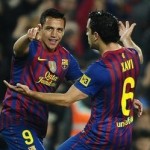 Alexis Sanchez netted a double as Barcelona closed the gap on La Liga leaders Real Madrid to one point with a 4-0 drubbing of Getafe at the Camp Nou.

Sanchez netted the opening goal on 13 minutes when he accepted a lovely cushioned ball by Lionel Messi – who showed some delightful awareness to control the ball with his chest – to send a shot crashing high into the net for the opening goal.

Messi added the second goal when he played a lovely one-two with Andres Iniesta as he dashed into the visiting box to plant the ball beyond visiting goalkeeper Miguel Moya one minute before the break.

Messi has scored an astonishing 61 goals for Barcelona this season, but Pep Guardiola’s team continued to look to bolster their goal difference after half-time.

Isaac Cuenca crossed for Sanchez to bury a header from close range on 72 minutes with Pedro doing likewise a couple of minutes later as he nodded into the Getafe net from Messi’s free-kick.

Barcelona are one point adrift of Real Madrid, who will hope to regain a four-point advantage when they visit neighbours Atletico on Wednesday night.