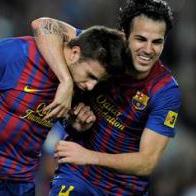 Barca did not have to be at their best but easily beat weak opposition as Pique headed them into an 18th-minute lead, Messi doubling the advantage just before the break.

Zaragoza offered little save a brief spell of pressure early in the second half, but any hopes of a fightback were swiftly put to bed when Puyol forced home a scrappy third on 54 minutes.

Villa, who had previously only scored three goals this season, came off the bench to add a fourth and was mobbed by his team-mates, who were delighted that he had found his scoring touch.