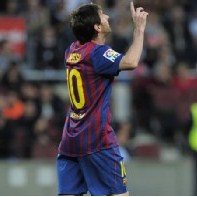 Lionel Messi scored a hat-trick to break the record for most goals scored in a European season as Barcelona kept alive their slim title hopes with a convincing win over Malaga.

Carles Puyol fired Pep Guardiola’s side in front at the Nou Camp, only for that lead to be cancelled out by Jose Salomon Rondon.

But Messi scored twice from the penalty spot before wrapping up his treble with a low drive to take his tally to 68 goals for the campaign, passing the previous mark of 67 set by Gerd Muller in 1972/73.

The win sees the Catalan club close the gap on Real Madrid to four points, although if their rivals beat Athletic Bilbao later this evening the title will head to the Spanish capital.

It was an emotional night at the Nou Camp as Barca played their first home game since Guardiola confirmed his intention to step down at the end of the season.